Zululand – or Kwa-Zulu Natal, also referred to as KZN or Natal, is a province in South Africa.

At around 92,100 km2 in area, Kwazulu Natal is roughly the size of Portugal. The province has three different geographic areas. The lowland region along the Indian Ocean coast is extremely narrow in the south, widening in the northern part of the province. The central region is the Natal Midlands, an undulating hilly Plateau rising toward the west. Third are the two mountainous areas, the Drakensberg Mountains in the west and the Lebombo Mountains in the north. The Drakensberg range forms a solid wall of basalt rising over 3,000 m (9,800 ft) near the Lesotho border, whilst the Lebombo Mountains are ancient granite mountains, forming low parallel ranges running southward from Swaziland. The Tugela River flows west to east across the center of the province and is the region’s largest river.

The province contains rich areas of biodiversity of a range of flora and fauna. The iSimangaliso Wetland Park and the uKhahlamba Drakensberg Park have been declared UNESCO World Heritage Sites. The iSimangaliso Wetland Park, along with uKhahlamba Drakensberg Park and Ndumo, are Wetlands of international importance for migratory species, and are designated as RAMSAR sites. South Africa signed the 1971 RAMSAR Convention to try to conserve and protect important wetlands because of their importance to habitats and numerous species.

The former Eastern Cape enclave of the town of Umzimkulu and its hinterland have been incorporated into KwaZulu-Natal following the 12th amendment of the Constitution of South Africa. The amendment also made other changes to the southern border of the province.

Prior to 1994, the territory now known as Kwa Zulu-Natal was made up of the province of Natal and the homeland of Kwa Zulu.

In the 1830s, the northern part was the Zulu Kingdom and southern part was briefly a Boer republic called Natalia (1839–1843). In 1843, the latter became the British Colony of Natal; Zululand (Kwa Zulu in Zulu) remained independent until 1879.

Located in the southeast of the country, the province has a long shoreline on the Indian Ocean. It borders three other provinces and the countries of Mozambique, Swaziland and Lesotho. Its capital is Pietermaritzburg, and its largest city is Durban. 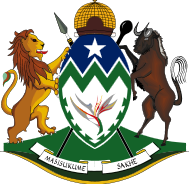