How it all begun - thanks to a concerned neighbour

Elizabeth sent us a letter: "Please, one of my neighbours is an elderly lady and her multi disabled grand son, age 12 - can you help them? They live in a one-room stone shack with no door or window, no water and no electricity. The boys name is Cebolenkosi and he was born with multiple sclerosis and needs to help with everything. He can hardly sit, he can't stand or walk, he can't talk and he needs to be fed. He is tied to the bed 24/7. Can you build a house for Cebolenkosi? He won't stand much of a chance for a long life, but he really needs help to get some decent remaining years.

We contacted Elizabeth and asked her to take us to meet Cebolenkosi and his grand mother Agnes. We drove from Eshowe and it took nearly 1 hour on a really bad dirt road to get there. We parked along the road. Their small shack was just up a small hill from the road. There were no road or even a path, just grass and sand. Not fit for anybody disabled - or anyone carrying a disabled child. Agnes met us in front of the shack - howling of joy to see us.

Every year, Flatbygdi school in Norway raise money for a charity project. This time, they had contacted Children of Zululand and wanted to raise money for our work in Zululand. We already knew the amount of money we were given from them and we knew we had enough money already, to build a house for Cebolenkosi - no need for instant funding.

We went inside the shack and in a small, moist and dark room, up against a stone wall, Cebolenkosi was laying on a bed. The bed was mainly mattresses on top of each other, with several layers of blankets on top. He did not make a sound, but he look scared. He was not used to seeing a lot of people, and certainly not a foreign group of people.

We looked around inside. We noticed that the grand mother kept the place nice. There were lots of things, bags of food, clothes, things that was needed for Cebolenkosi, like diapers and a lot of other things. But other than all the bags, the place was kept clean. Around the bed, with Cebolenkosi in it - no fumes or odurs - just the feeling of clean.

The desicion was made - When can we have the house ready?

Let's build a house to Cebolenkosi. The delegation looked at each other. All the board members of the organization was present. We all agreed. Let's do it.

We went back to Eshowe and we debated more over this project. Linda suggested we talk to a local constructor. We contacted him and sat down for a meeting with him. We drar som sketches on a piece of paper. This is what we want. A small house. A main room and a bed room. That's enough. He cannot stay alone in his room anyway. But they need space enough for a wheel chair, space for a chest of drawers and some cabinets. They need a kitchen table, new bed with nice mattresses, electricity installed and water supply, if possible. And a front terrace. A place where the grand mother can sit him down in his wheel chair, so that he can get outside, get some fresh air, hear birds and crickets sing or feel the summer breeze on the face - with a cap and a pair of sunglasses on. This was in the middle of February.

The constructor was very interested in doing this project and he went with us to meet with Cebolenkosi. We told him about our mission and our goal. He met Agnes and Cebolenkosi and was very touched by the setting. We there and then devoted himself to put as many people as needed to finish the new house before Easter. With a nice front terrace and a concrete path around the house, with water supply and electricity installed. And of course a wheel chair.

The constructor delivered as promised

Just before Easter, the house was ready. The constructor updated us ongoing, with photos and debates on solutions. The day arrive. Cebolenkosi was moving in. The constructor himself carried Cebolenkosi from his old bad in the old shack over to the new bed in the new house. It was only a few meters away. This was not a big step for man kind, but it was such a huge step for Cebolenkosi. And was he joyful about it! As well as Agnes, his grand mother.

Children of Zululand was represented by Linda, our local manager in South Africa and her mother. It was a joyful day. A day to remember.

Less than a year later, Cebolenkosi dies. He turns sick one night. Agnes is trying to reach a doctor, but Cebolenkosi is very weak, caused by his general condition. His little body is not able to fight. Sadly, Cebolenkosi dies already the next day.

We were informed and we informed Flatbygdi school about the sad news. We all felt really sad about the passing of Cebolenkosi, but we also knew he is know in a better place. We also know that, despite of the short time he was able to live in his new house, he enjoyed it. He did not have much of chance to begin with, being born with a bad disability, in a poor rural area in Zululand. But he had his grand mother, who dedicated her later years to take care of her grand son. And he did have some better months before dying, in his new bed in his very own house.

Children of Zululand donated money to give Cebolenkosi a grave and his grand mother, Agnes a grave to go to.

We are telling this story because we believe that Cebolenkosi's life mattered. He lived a short life, but his life impacted on a school across the world, in Vik, Norway. They made an effort to give him a house. They engaged an entire community to fund money, so that he could have a better life. And he did. Untill the end.

Grandmother Agnes is admitted in Eshowe hospital after haveing a major stroke at the end of January 2021. She passes away on February 2nd 2021.

May Cebolenkosi's and Agnes' souls rest in peace! 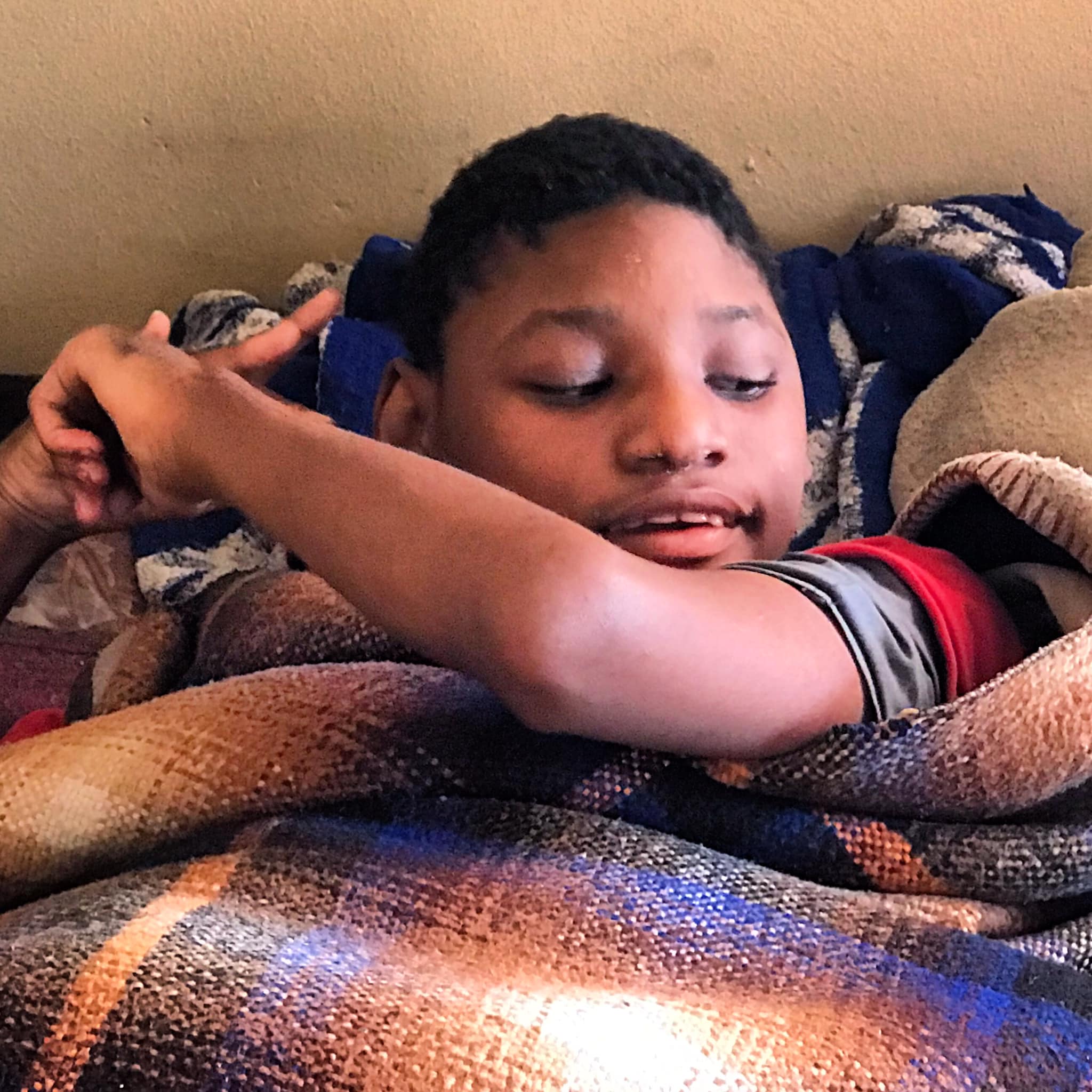 What does Children of Zululand’s work mean to the area? An interview with Linda de Lange